Students and staff are raising funds and collecting goods for people affected by the recent flooding in BC, as well as helping those in need even closer to home this holiday season.

Helping Those Impacted by Flooding

Grade 4 and 5 students at Gilmore Community School sprang into action after a class discussion about the floods. Demonstrating their own lesson in kindness and helping others, they rallied to collect items to bring to the Archway Food Bank in Abbotsford to support families in need.

Students and staff at University Highlands Elementary are collecting food, toiletries and toys to donate to flood relief efforts. They are joining their partners on Burnaby Mountain as part of broader efforts by the Simon Fraser University community.

Animals were also impacted by the floods. At Parkcrest Elementary School students are raising money for the Abbotsford SPCA Branch to help them support animals that were displaced or are in need of veterinary care.

Leadership students at École Alpha Secondary are collecting blankets, coats and clothes for people impacted by the floods. And Burnaby Mountain Secondary raised financial contributions by supporting donations via their School Cash Online site and directly to the BC and Yukon Branch of the Red Cross.

These are just some of the examples of ways school communities are coming together to help those impacted by flooding.

With fuel availability affected by the floods, the Burnaby School District is doing its part to conserve gasoline to help ensure there is enough for emergency vehicles and those that need it most. Read the letters Superintendent Gina Niccoli-Moen sent to staff and families on November 22 and November 30.

The Gift of Giving to More Communities

With this holiday season being different for everyone once again, students, staff, school communities and the District are collectively working to bring joy and necessities to local neighbourhoods, as well.

Leadership students at École Inman Elementary partnered with a local business, putting together nearly 300 dental kits for the Burnaby Homeless Task Force. They will be included, along with handmade cards, in comfort kits that will be distributed to Burnaby’s most vulnerable.

Kindness and creativity are also on offer from students, such as those at Burnaby North Secondary who are creating 2400 holiday cards in one week for seniors in Burnaby. What they’re calling “Operation Elf” is being put on in partnership with Intentional Acts of Kindness and Citizen Support Services.

Many schools, such as Lyndhurst Elementary, are also holding holiday drives for the Greater Vancouver Food Bank. And last month, students at Second Street Community School collected hundreds of non-perishable goods for a food drive held in honour of one of the biggest festivals recognized by Sikhs around the world: Gurpurab, also known as Guru Nanak Dev Jayanti, which celebrates the birth of the first Sikh guru.

Staff are also contributing to the Burnaby School District’s annual United Way Campaign with financial contributions or by volunteering their time, such as by helping to pack food and holiday hampers. Employees who wish to participate should check their email received on November 26. 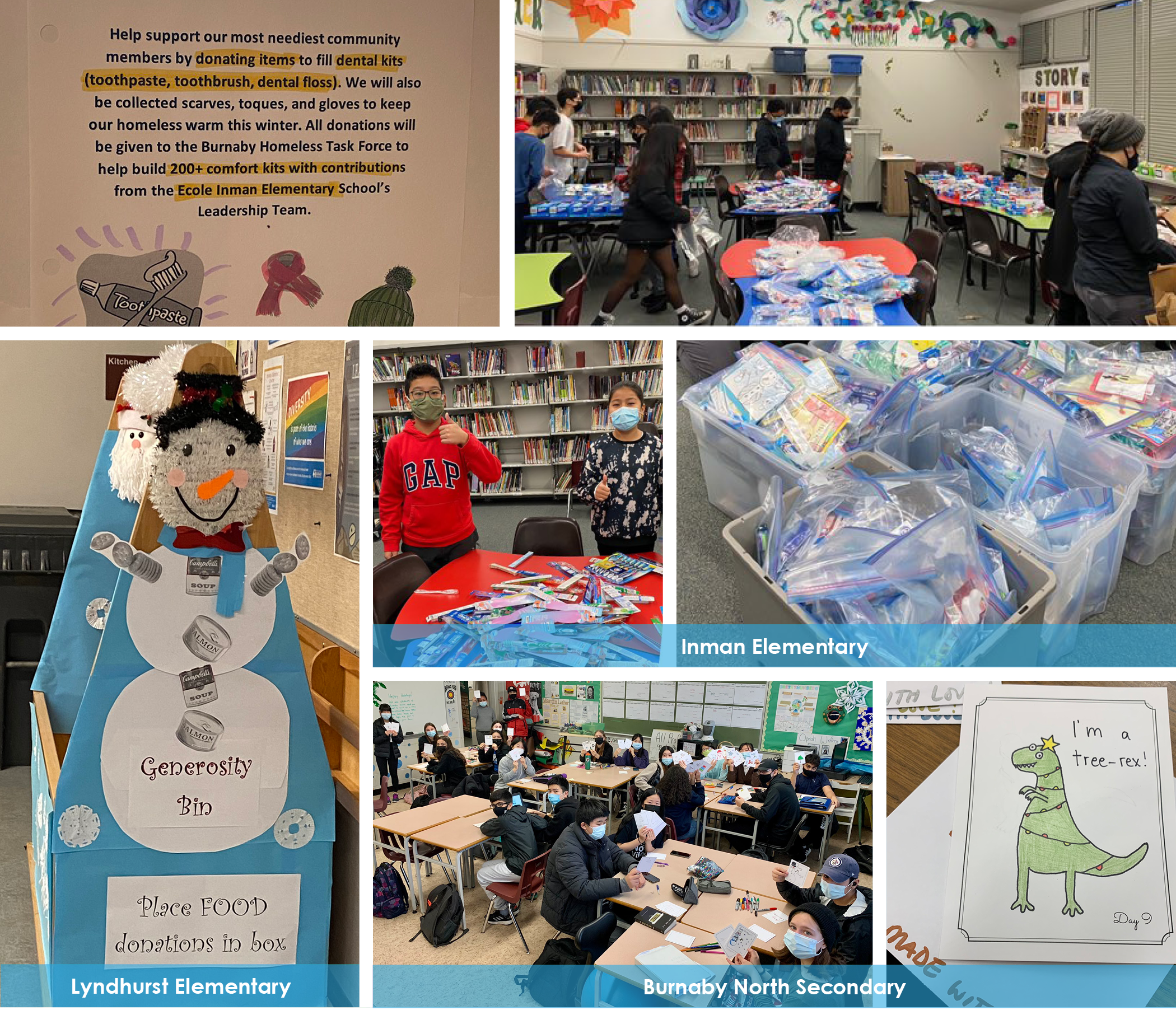