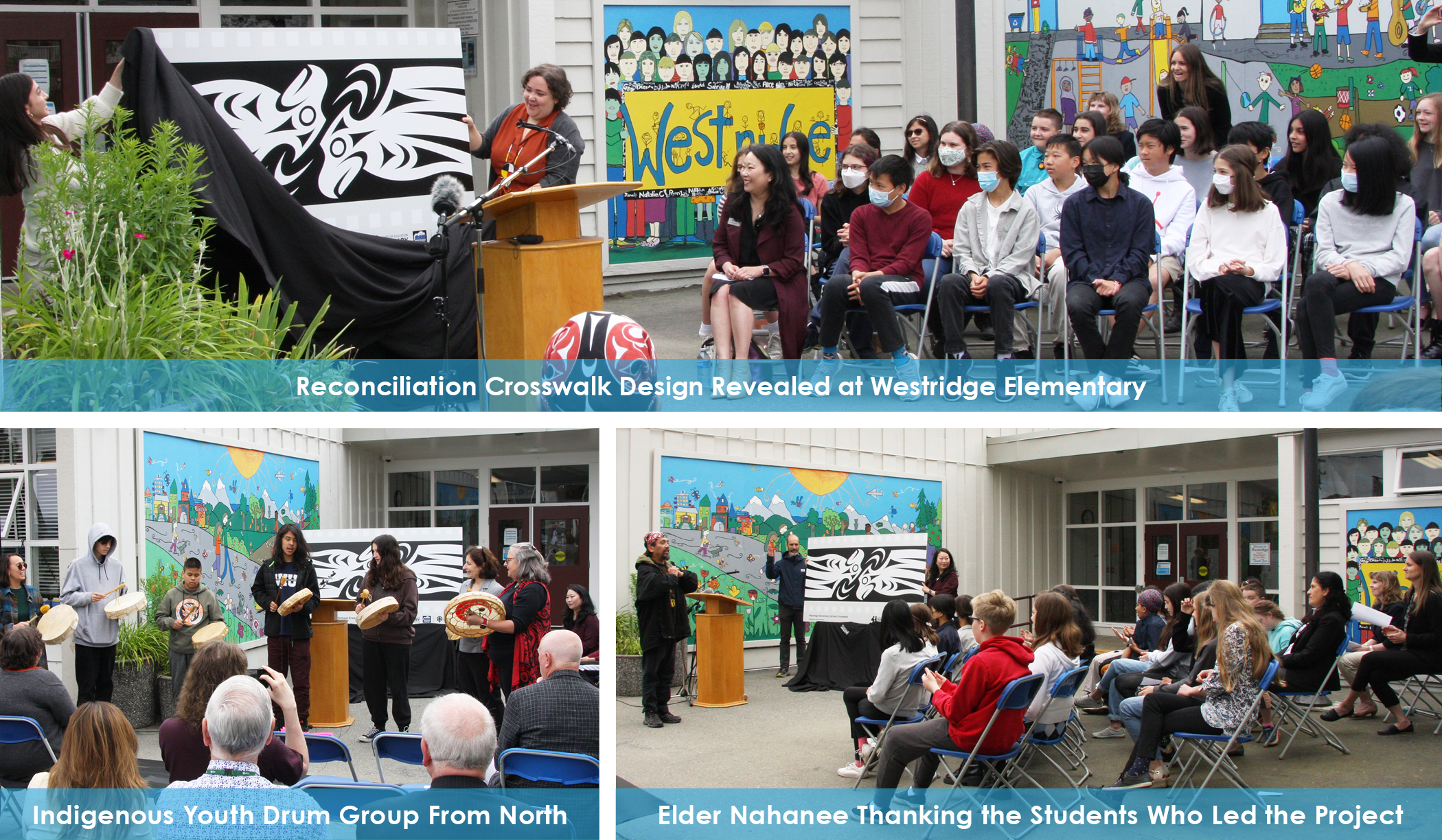 The District and City of Burnaby came together in partnership to support the efforts of Grade 6/7 students at Westridge Elementary, who came up with the idea to put reconciliation into action through the creation of a new crosswalk near their school, designed by a local Indigenous artist.

The students, in teacher Audrey Venner’s class, initiated the project after investigating the 94 ‘Calls to Action,’ issued by the Truth and Reconciliation Commission of Canada. The class decided to act on Call #82, which calls on communities to “install a publicly accessible, highly visible residential Schools Monument […] to honour Survivors and all the children who were lost to their families and communities.”

Coast Salish artist Atheana Picha collaborated with the City of Burnaby and the school, listening to the students’ ideas, working with them and sharing her teachings. Her resulting creation is a meaningful design featuring Thunderbirds mirroring each other that was unveiled on June 20 in advance of National Indigenous Peoples Day in a ceremony at the school.

The students shared their thinking at the celebration event:

We really wanted to do more than simply talk about Canada’s dark past…We wanted to find a way to acknowledge and apologize for all the acts of racism against Indigenous peoples past and present in Canada in a more meaningful way and do our part to contribute to the solution moving forward.”

Picha took input from the class before creating the final design:

It was exciting to work with these students because they were so interested and involved in reconciliation, and they are so motivated to see people working for the future together – both Indigenous and non-Indigenous people.”

At the unveiling event, the Chair of the Burnaby Board of Education expressed her gratitude on behalf of trustees to Mayor Mike Hurley for the City’s support, funding, and agreeing to install the crosswalk on city property. She also thanked the National Centre for Truth and Reconciliation, which provided the initial grant following an application from the class.

One of the things that is so powerful about this project is that the students took their learnings about Truth and Reconciliation and answered the Calls to Action in a way that is meaningful to them, is highly visible, and invites the entire community to reflect on their own path to reconciliation.”

Along with Chair Mezei, Mayor Mike Hurley met personally with the class when they initially laid out their vision for the project and requested the City’s approval and involvement:

It is inspiring to see young people take a leadership role in our community, especially when it comes to reconciliation. Thanks to the efforts of the Westridge Elementary School class, and the talents of Atheana Picha, Burnaby will soon have a beautiful piece of public art which will also serve as a poignant reminder of the work we must all do to support reconciliation in our community.”

The City plans to install the crosswalk this summer. It will be located where Drummond’s Walk Urban Trail crosses Union Street, a path that many students use every day. Westridge students sometimes refer to the adjacent area as “the forest” and often go there for outdoor learning. The students shared that they were hoping that the calm environment would help community members “pause on their walk to think about the meaning and symbolism of the crosswalk, appreciate the land they live on, and realize the role they can play in their journey towards Truth and Reconciliation.”

Scroll down to see more photos.

Learn more about the Reconciliation Crosswalk in the joint press release with the City of Burnaby here.

More information about Indigenous Education in the District, projects within schools, and learning through Indigenous teachings can be found here. 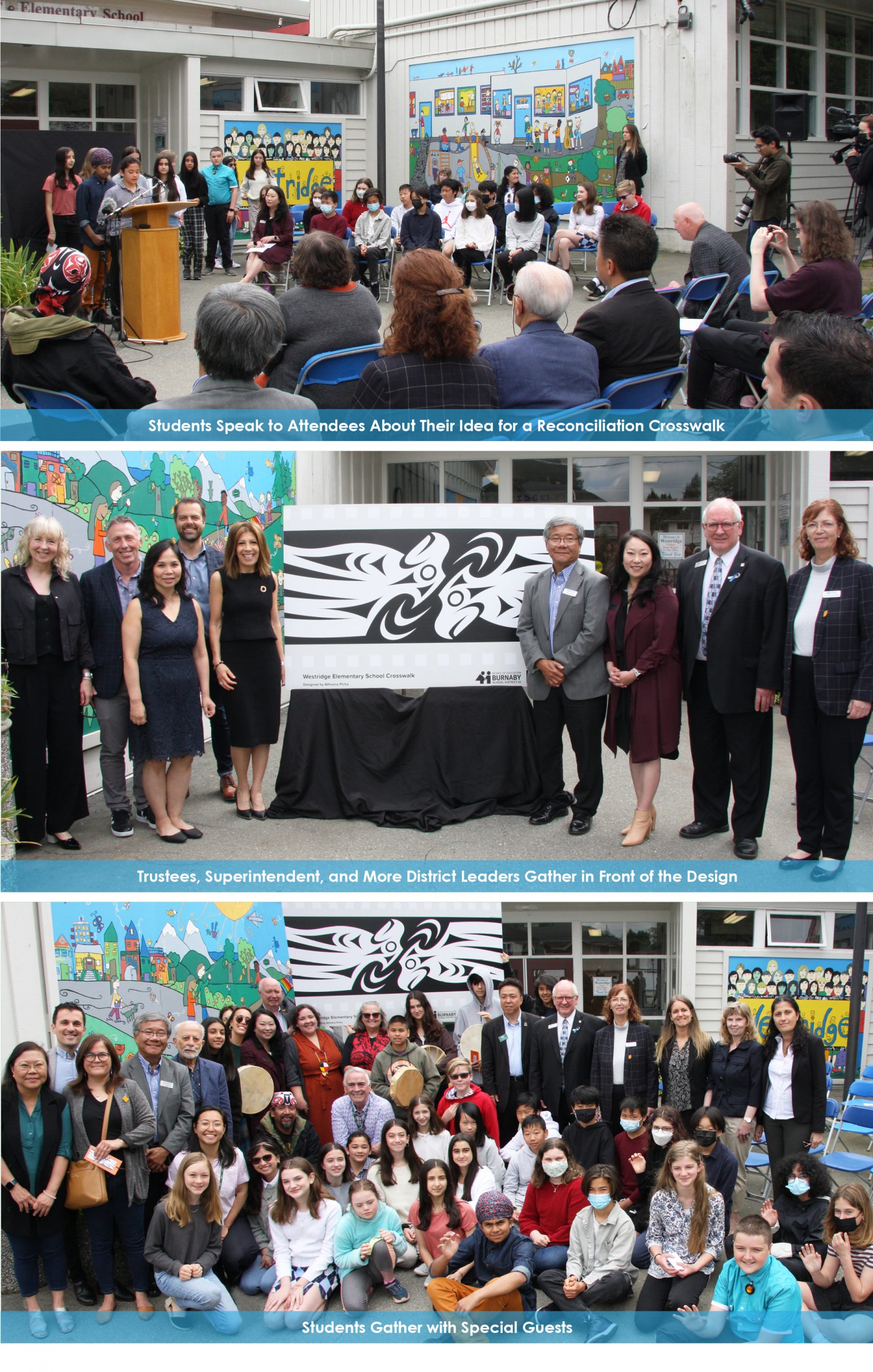