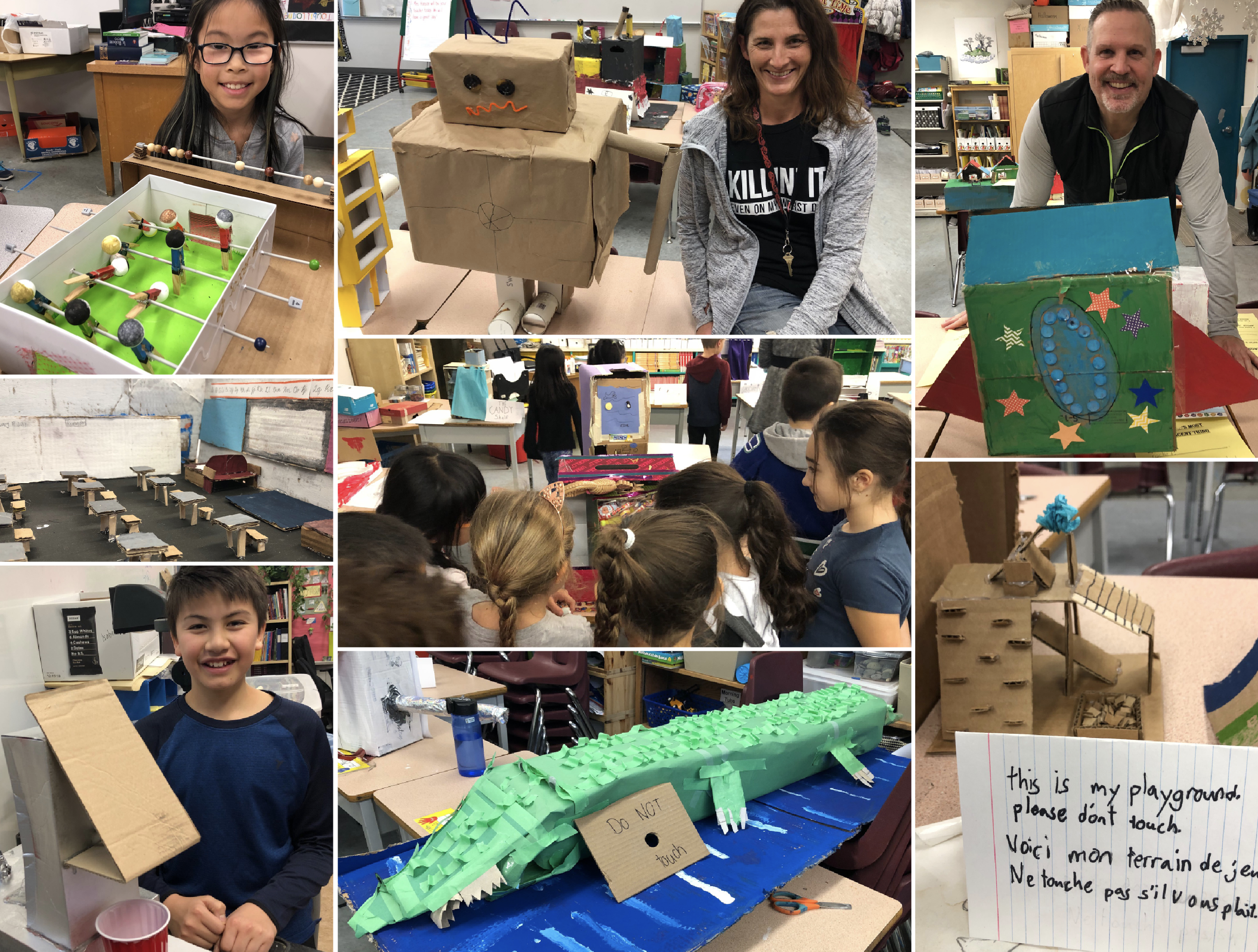 Students at École Seaforth Elementary spent a week on a cardboard box-based project that was a “magnificent thing.” The school-wide project was inspired by the book The Most Magnificent Thing by local author Ashley Spires. In it a little girl takes random parts, uses her imagination, and creates something wonderful.

Students from Kindergarten to Grade 7 were tasked with creating something out of nothing, with the only stipulation that the majority of it had to be cardboard. Principal Wendell Hiltz said at first the kids were a little daunted by the openness of the assignment, which was intended to stimulate creativity and imagination.

“When we said to the kids ‘you’re taking a box and turning it into anything’ we got some blank looks at first, but they embraced it, ran with it and the results were amazing.”

Students created everything from a mini-classroom to animals and robots. Grade 7 student, Kai, took the project to another level with a working water dispenser that connects to a wireless plug and is operated through an iPad.

“I learned to be creative,” said Kai, while demonstrating how water flows through his invention. “At first I thought ‘how can I make a drink dispenser?’ Then I decided to make the box frame, connect it with tubes and an air mattress pump – which was loud, so I insulated it. And I put it all together with hot glue.”

Grade 4 student Alyson said it was “super fun,” and she explained that her creative choice was inspired by necessity. “We don’t have a foosball table at home, and I always wanted one,” she said.

Principal Hiltz credits the timing of the project with contributing to its success.

“I thought it was going to be insane collecting this amount of cardboard, and it certainly was. But the timing ended up being perfect because right after Christmas, what does everyone want to do with those boxes? Get rid of them. So we put out the letter request to families just before the holiday break, and it couldn’t have worked out better.”

The project took a week to complete. It began with an assembly on Monday and culminated with a “gallery walkthrough” of all the classrooms on Friday, so students and parents could see the creations.

The idea came from Grade 4/5 teacher Robyn Scott, whose daughter had done it with her own class, and was so excited that she inspired her Mom. Scott also shared a resource package with her colleagues. It was created by literacy specialist Adrienne Gear for teachers who want to inspire their students to create with cardboard.

“I just felt that we do so much pen and paper work, and this is a really good chance for kids to build a number of skills,” said Scott. “So while we’re building community within our school the students are learning communications skills, problem solving and team work. To me, that was the most important thing: developing those skills and the process behind it, rather than the end result.”

Nevertheless, the end result is also a most magnificent thing. See for yourself.