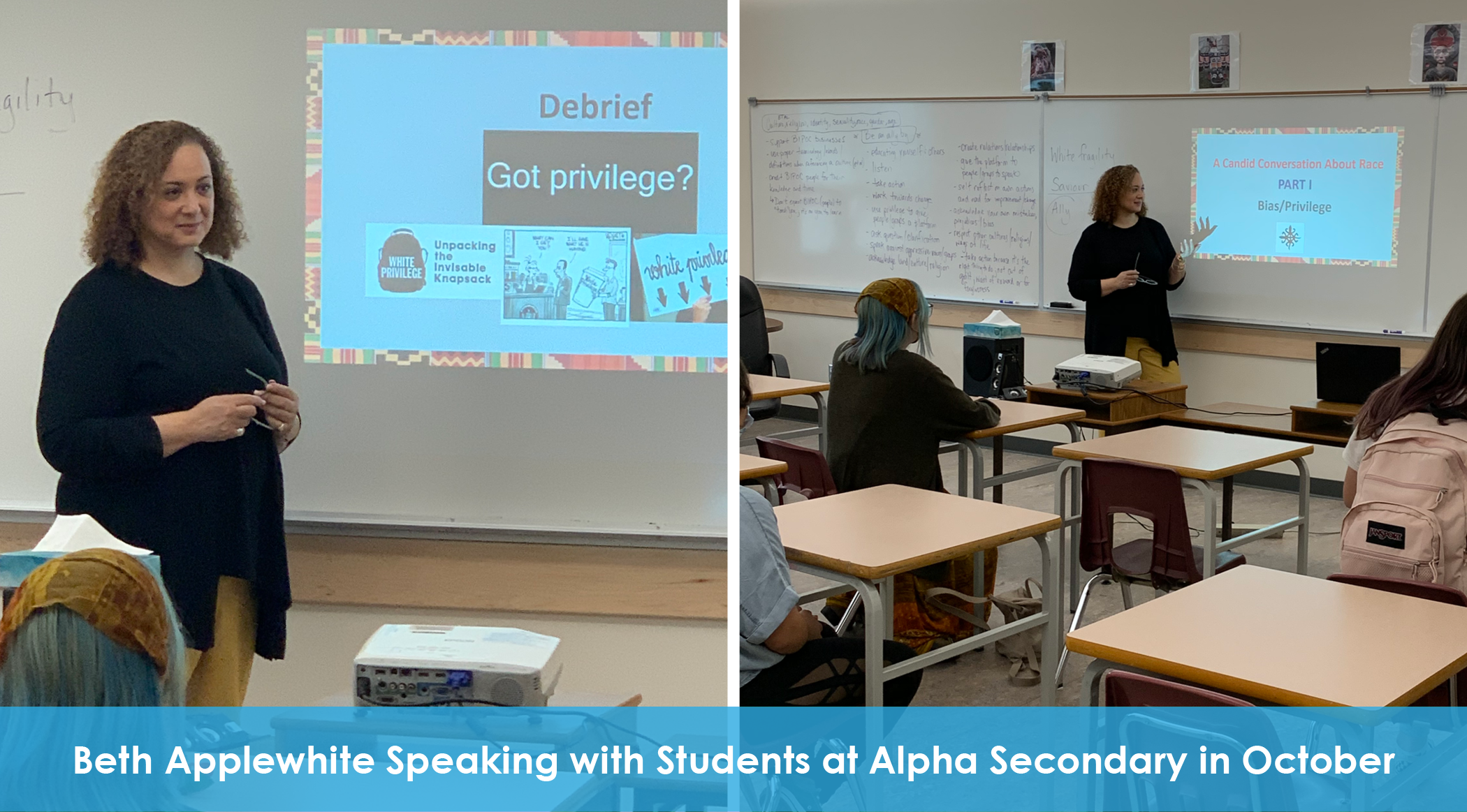 As the District continues its journey to support an equitable, diverse and inclusive environment for all staff, students and their families, organizational change is being championed by the Board, senior leadership and our new Vice-Principal of Equity, Diversity & Inclusion: Beth Applewhite. She’s the lead staff member on the anti-racism work set in motion by Trustees with their resolution at the Board Meeting on June 23.

Since starting in this newly created position at the District in August, Ms Applewhite has taken several steps to support both school communities and district leaders with learning and “unlearning” what they know about racism, as well as how to be an active anti-racist.

A bi-racial educator of Trinidadian and Scottish heritages, Ms Applewhite is an accomplished leader in anti-racism work and a trailblazer. She’s also a former teacher in Burnaby.

I am so happy to be back with the Burnaby School District – it truly feels like I’ve come home. Though I left nearly ten years ago, my heart has been in Burnaby, because this is where I completed my student teaching and began my journey as an educator.”

Burnaby is also where she began putting in place structures to support anti-racism in schools. In 2007 while working as the English Department Head at Moscrop Secondary, Ms Applewhite created the first Black Student Committee (Public School) in Western Canada, providing a safe space for Black student voices. Over the past decade, she has coordinated annual events for youth across school districts to acknowledge Black History Month, Truth and Reconciliation and Equity, including the Race Matters Conference and youth symposiums. Having connected students from many schools and districts, her student-centered events grew exponentially. In 2016, she created the first Anti-Racism Youth Symposium for the Metro Vancouver area.

Since returning to Burnaby at the beginning of August, she’s begun building and enhancing awareness and understanding of anti-racism by speaking with and holding workshops for a number of groups: from Trustees, senior management and principals to head teachers, counsellors and students. She’s also worked with both secondary and elementary school-based anti-racism committees in the District, and led workshops and professional development in neighbouring school districts. She collaborates with and works alongside our Indigenous Education team.

At the first public Board Meeting of the school year, she told trustees:

“I am so proud to be working in a district that so genuinely and unapologetically supports anti-racism work. Much gratitude and appreciation for taking advantage of this moment in history to use your privilege to make a meaningful difference for Burnaby BIPOC children and their families. It will make a powerful difference for all children and families.“

Meaningful engagement and moving anti-racism work forward is a key priority of the Board and District.