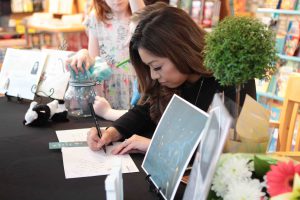 Everywhere you turn, authors are popping up in Burnaby Schools! Armstrong Elementary Learning Support teacher, Jillian Ma, has written a book about a boy with autism called In My World. A book launch took place on September 23 at Coles in Lougheed Mall. A second book is already in the works.

Marlborough Elementary school teacher, Emily Goldsmith, has written a book called Jordan and All The Favourites. The story features gender-neutral names and illustrations by Susie Wilson. Her book launched at Chapters in Metrotown on September 30.

Amanda Zanette, a grade 5/6 teacher at Forest Grove, has authored a book called, The City Game. In this book for educators, she shares her secret to student engagement where she actually creates a city within her classroom. As students take turns playing the role of Mayor and other key citizens, independence and empathy is fostered through classroom role play.

Two books have recently been published by teachers at Byrne Creek Community School. An AP Physics textbook, Edvantage Science, by Science teacher Stephen Fuerderer, is designed to challenge the best science minds. And the graphic novel Nighthawk & Little Elk by English Language teacher Ilonka Harris is an international hit. It has been translated into seven languages, including four Indigenous languages.

Congratulations to all. We are very proud of your literary accomplishments!  LEARN MORE