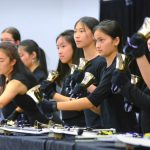 Twelve students who play in the Burnaby School District Handbell ensemble, Sound Wave, played at the opening of the international Handbell Symposium in Vancouver this summer. Under the direction of Janet Nordstrand, they performed to near perfection under the attuned ears of more than 650 delegates. At the end of the week, it was Janet’s turn to be on cue – conducting a mass choir of all delegates at the symposium’s final concert. LEARN MORE Photo by C. Naylor Burnaby Now